While most touch screen controllers for Ableton Live offer access via an independent device as a remote control, Yeco goes a different way. It's about having the multi-touch control interface running on the same computer as Live with full ten point multi-touch. 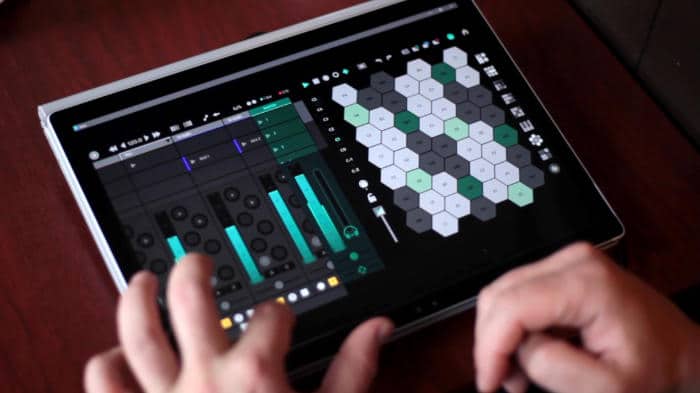 The good news is that it runs on both Windows (Windows 8+) and Mac (OS 10.10+). However, getting it to work on Mac is still pretty tedious as Apple only offers touch screens for their iOS products. You need an extra touchscreen and a driver which both will cost you. For those of you on a Mac and interested, here's an article detailing how it works. So it's fair to say, that Yeco is much more suited for Windows at this point with a laptop like the Microsoft Surface.

What stands out instantly is that since the screen surface is generally bigger than on tablets, it's easier to use. The basic layout follows Live's Session View. It includes large faders, device controls with value feedback from Live and all of Live’s names, colours and playing positions.

Both the Keyboard as well as the Drumpads offer positional velocity control on each key. The former also channel pressure, macro controls and assignable MIDI controls. This feels surprisingly intuitive and allows for more expression than your average touch screen controller.

Yeco doesn't have the typical pad layout for playing in scales. To make it easy to transpose chord shapes or scale patterns, the Hex Controller uses an isomorphic keyboard arranged in a harmonic table note layout. There's also 4 big XY pads to control multiple parameters. These are assignable via buttons which is easily done. And last, but not least, there's the MIDI Control Panel that features 56 assignable elements including: 27 sliders, 6 knobs, 9 momentary buttons and 14 toggles. All of them freely assignable for quick access.

One thing I was missing while testing was access to the Arrangement View. The Session View is great for jamming, performing or finding new ideas, but I switch fairly quickly to the arrangement when I'm producing. To be fair, this isn't just a criticism of Yeco, but every single MIDI controller out there. Not even Push offers a deep integration which would make production more fluid in Live.

If you happen to have a touch screen computer already and are working with Ableton Live, it's an absolute no-brainer. Simply get Yeco and use it in the studio, on stage or on the go.

Check out the video tutorials:

Yeco is available for €45 (plus local taxes).