Captain Plugins for Easy Composition by Mixed in Key

Mixed in Key have released a new plugin bundle recently. It's called Captain plugins and they make composing much easier. At the moment, four plugins are available, called Chords, Melody, Deep and Play. Two more, named Hook and Beat will be released in the future, and free for anyone who's previously purchased the Captain collection. They're available for macOS and Windows except for Captain Melody which is only available for macOS at this point. I've tested the first four plugins for you. 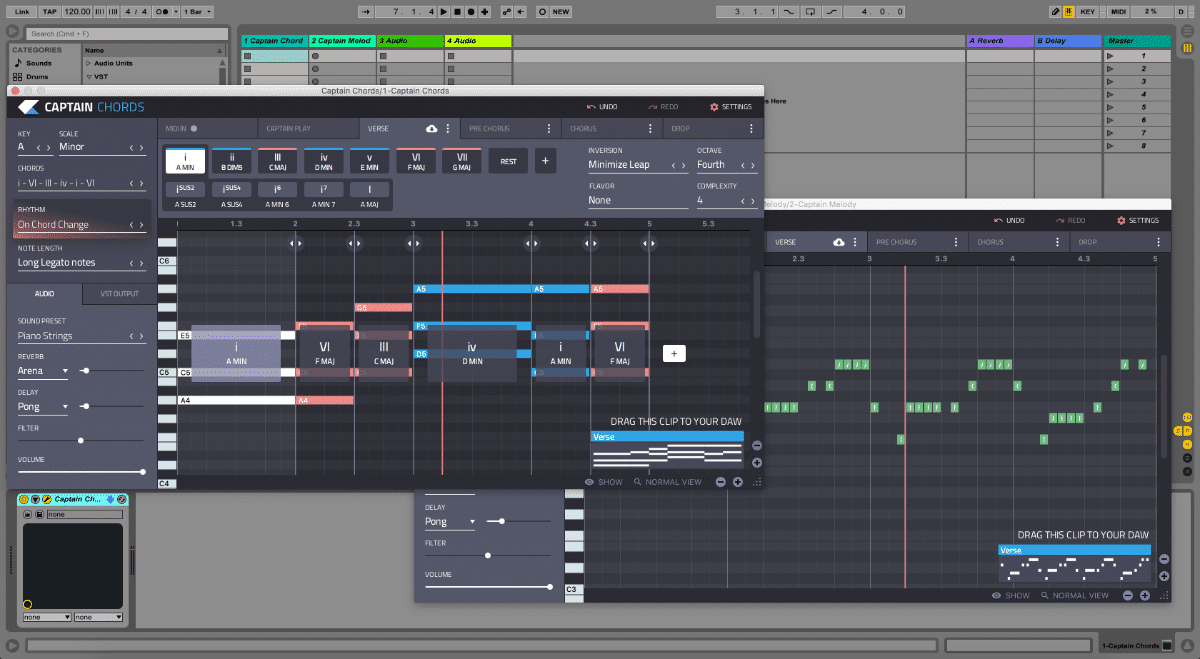 Using Captain Chords is straight forward. You first set the key and scale or click on Randomize if you prefer having it chosen for you, then you can choose from 68 chord progressions, one of way over a hundred of rhythms, and set the note length. In the Audio tab you can choose one of over a hundred presets, choose one of five types of reverb, choose delay setting, and the wet amount of both effects, as well as apply a low or high pass filter. In the VST version of the plugin MIDI output is also possible to let Live instruments, other plugin instruments or even hardware provide the sound.

Composition can be done in different tabs labelled Verse, Pre Chorus, Chorus and Drop. There you also have the different chord intervals listed, so you can make adjustments or add the chords or rests in there. Not only the simple triads are options, but also more complex chords. There's also the possibility to add custom chords via the + button. You can also adjust the type of inversion, the octave, the flavour (adding additional notes to the chord) as well as the chord complexity. The length and position of each chord can be easily changed in the piano roll by simply dragging the arrows left or right. 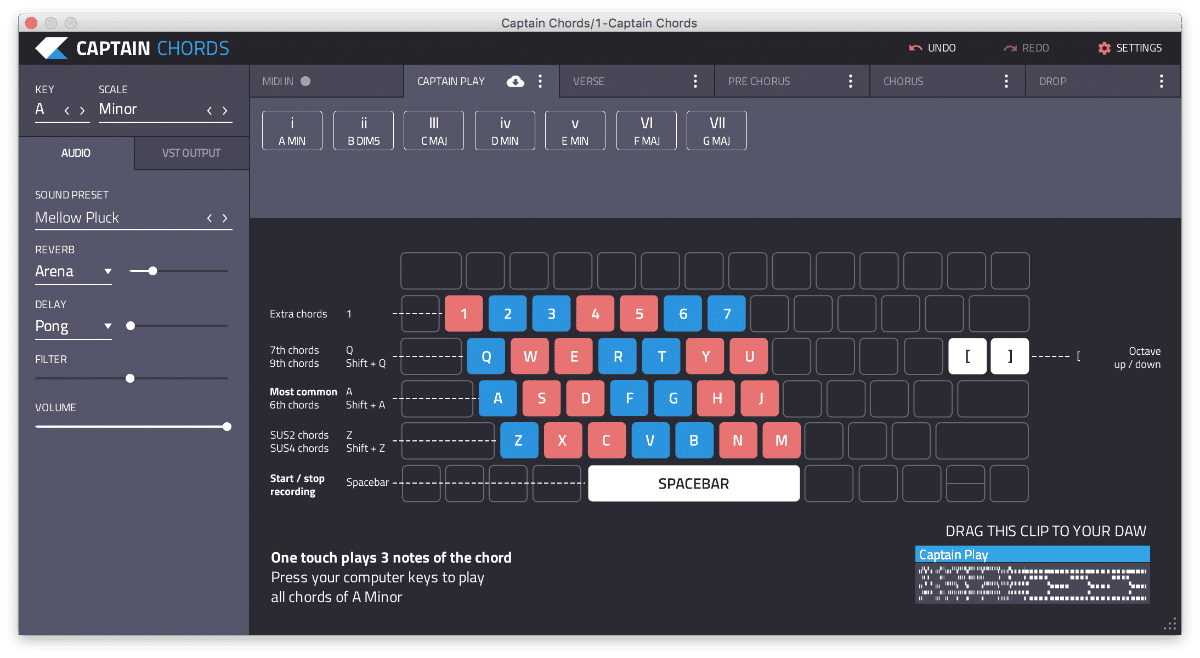 In the Play tab, you can use the computer keyboard to play chords from the selected key, which is a nice feature for jamming. This tab is also available in Captain Play under the name Play Chords, the latest release in the bundle. With Play Single Notes, you can jam out melodies. 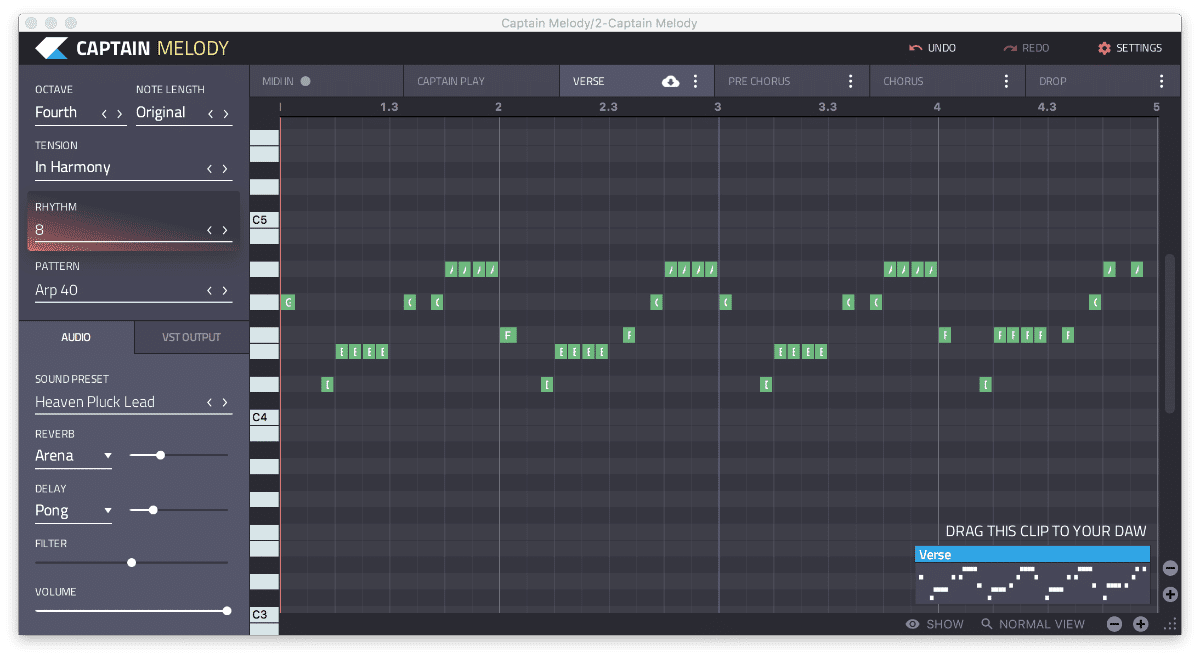 Captain Chords also functions as the base for Melody and Deep, so that they're all automatically using the key and scale set in Chords. For this, once dropped into another MIDI track, they first need to be connected to Captain Chords. In Captain Melody you can select the octave, note length, tension, rhythm and pattern. Both Captain Melody, meant for melodies, and Deep, meant for bass lines, also have the Audio and MIDI tabs, as well as the compositional tabs for MIDI In, Play, Verse, Pre Chorus, Chorus and Drop  that Captain Chord features. The Play tab enables you to jam playing single notes on the computer keyboard. 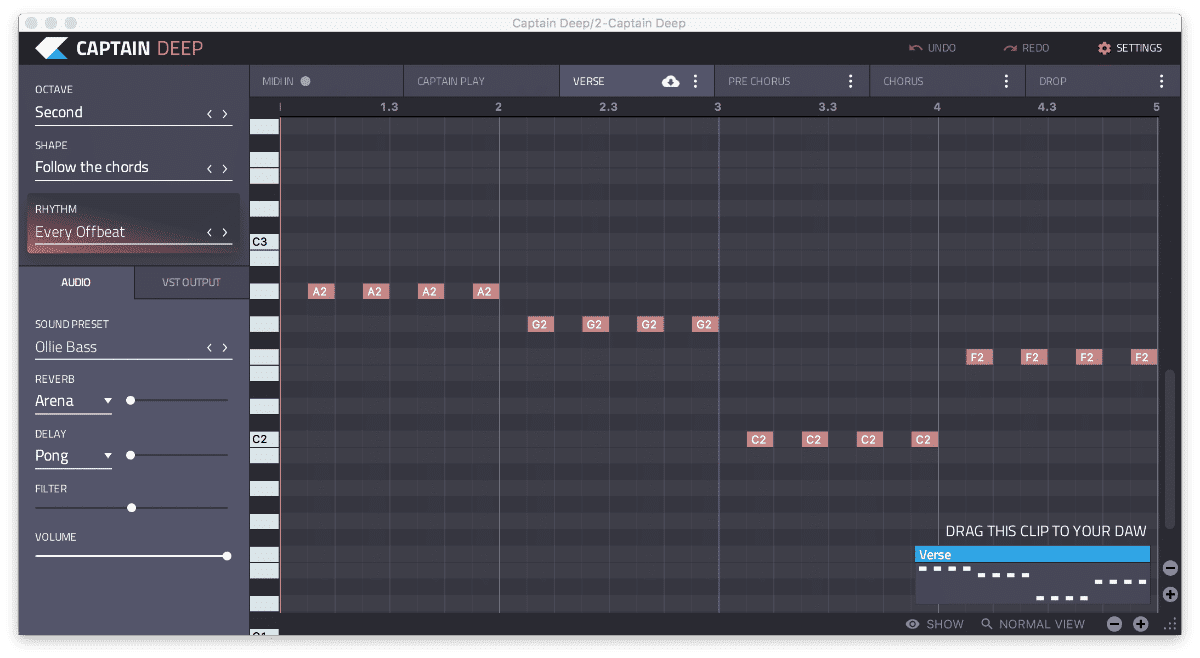 In each plugin you can hit the spacebar to start or stop recording of the MIDI notes, and once you're happy with the result, you can simply drag and drop the little clip representation in the bottom right to your DAW, which creates a MIDI clip that can be edited further.

The Captain plugin bundle could certainly be helpful for professional producers with tight deadlines, say for music for ads etc. If you don't have any knowledge of music theory though, you can only really go through the chord progressions to get good sounding ones or rely on your sense of harmony. To make full use of the plugin features, I'd recommend learning some basic music theory. What chord intervals are or inversions, which keys and chord progressions are useful for what kind of mood. One afternoon at the weekend could take you a long way, since the plugin bundle can be a good guide to make the theory more accessible, as you can try out directly how certain chords will sound and how jumping between various intervals changes the mood of the composition. This could save you countless hours of the nitty and gritty of music theory, because knowing the 101 stuff should be enough for most in tandem with the Captain plugins.

It took me less than ten minutes to create a chord progression, a melody and a bass line, to then jam some additional bits on top with Captain Play from loading the plugins for the first time. However, I'm classically trained from an early age, so I understand music theory and the plugin GUI thus was pretty self-explanatory.

Captain Plugins are available from Mixed in Key for the introduction price of USD 79.

Update: Mixed in Key have added new features to Captain Chords with version 2.0 that are noteworthy: