Volume & Panning as a Representation of a Sound in Physical Space

One typical rookie mistake of aspiring music producers is that they try to make everything sound equally loud and on top of it forget to use the panning to their advantage. This will ultimately mean that their productions will sound flat and uninspiring, even if the musical ideas themselves are good.

The way to avoid this pitfall is to imagine the parts of a song in relation to the listener in an actual physical space. When you have a band playing together in a room or on stage, the players and instruments are positioned a certain way. They're obviously not all standing or sitting in the same spot. The vocalist generally front and center, the drummer at the back.

When you listen to music productions from the 60s or 70s, this representation in a physical space is very apparent. Have you ever listened to a Beatles song on headphones and noticed how hard panned the instruments tend to be?

I'm not saying you should arrange your individual tracks exactly the same way. Vocals or lead instruments tend to be mixed centered and in the foreground as they are the focus, but rules are there to be broken - at least sometimes. Just try to think about your tracks as an arrangement of different instruments in a physical space. Or even take a piece of paper and draw the positions of those sounds in as an exercise. 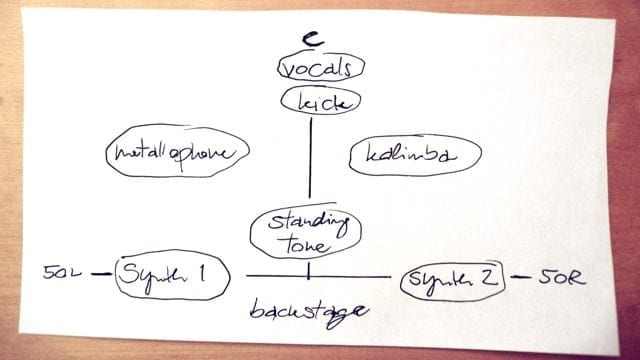 What is the absolute focus of your song or track? This one usually will need to be relatively loud in the mix and centered.

Continue the same exercise with the other tracks. What about placing this one sound on the left, another one to the right. When you pan tracks, just check the level of your master track in between. You don't want to end up with a mix that is lopsided.

The same goes with the volume levels of all tracks. Some sounds are the focus and thus should be very audible in the mix. Others might just help to get the energy right in a particular part of your song and can be mixed in the background.