Have you ever noticed that a sound is different when you run it through effects at a high or low level? That’s one of the reasons why gain staging is so crucial. However, 80% of the time I’m mixing someone else’s work, I get a mix that’s way too hot. It’s either clipping on the master or even worse, already clipping in individual tracks. Most people simply turn down the master and call it a day, but then wonder why the mix sounds so crappy. It’s no surprise if you overload the effects whether it’s the native ones or plug-ins. Quite frankly, this probably is the source of the myth that Ableton Live doesn’t sound as good as other DAWs.

In the days of analogue mixing, you’d have to find a balance between getting the sound as high above the noise floor as possible while leaving enough headroom to avoid clipping. These days, the noise floor is generally so low, there’s rarely a need to carefully balance the signal-to-noise ratio. Yet, while analogue clipping could sound quite good, this is not the case in the digital domain. There, clipping produces anharmonic distortion which sounds sheer ugly. Think of gain staging as giving you a safety buffer to avoid clipping and an overloaded, too hot mix.

Before we talk about gain staging, we should quickly go over the signal flow in Live. I noticed that this is something a lot of users aren’t really aware of. Yet, it’s critical to understand it. 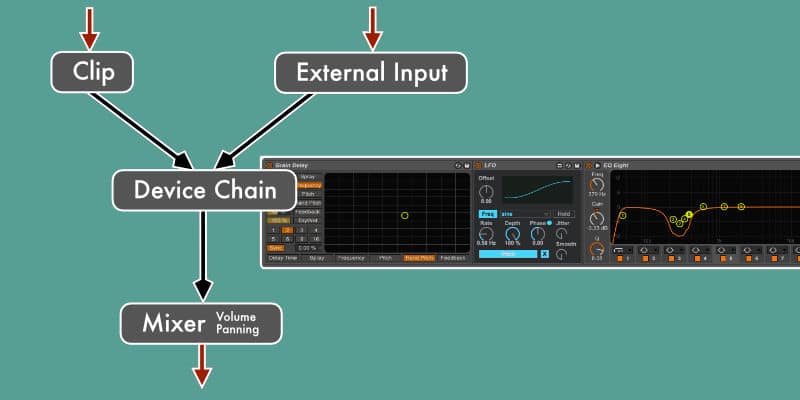 The signal flow in a track in Ableton Live

The signal in a track originally comes from either a clip or an input source (external instrument or mic, rerouted track) when it’s audio. In MIDI tracks of course, we only get audio once the MIDI data is converted into sound in the MIDI instrument. Then it goes to the device chain in the track (as displayed in the device view in Live) into the device on the left (or right after the MIDI instrument on MIDI tracks), then through every audio effect in the track from left to right. Finally the sound goes through the mixing element with volume and panning before it is routed out to either the master track or whatever track is chosen in the Audio To setting. 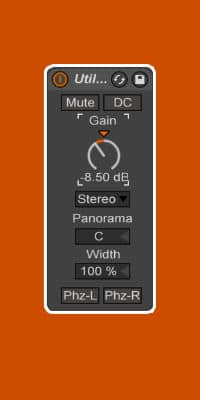 So if the signal comes in too hot from a clip, simply turning down the volume won’t cut it. That’s because the volume comes last in the signal flow. A lot of the clips shipped with the Live Library or available for purchase are very loud and need to be adjusted. The same goes for presets of MIDI instruments. Use the volume setting in the Live instruments or plug-in for this.

If you’re recording an external signal, make sure you’ve set the volume to a decent level that avoids clipping even when the sound gets much louder all of a sudden. That’s especially important when you’re recording vocals as the volume of a voice can fluctuate between a whisper and a scream. The rule of thumb is to keep the average volume level at about -10 to -12 dB. Don’t forget to check the mic positioning in terms of distance to the computer and other gear that might introduce noise. If you’re recording something that creates noise on its own, make sure that the sound level is well above the noise floor without clipping.

If you’ve already got a clip in your track in Live, you could of course simply reduce the gain level within the clip. However, this is not a neutral operation in Live and might change the sound. Instead, add the Utility effect as the first device in your effects chain in every track and adjust the gain accordingly.

Clipping must be avoided on all tracks that are routed out of Live. This is first and foremost the master, but this depends on your routings in your Live Set. Don’t forget to keep an eye on the master volume. It should not only stay in the green, but leave a headroom of about -3 to -6 dB for mastering later on.

Now that we’ve adjusted the volume of the clip or other input source, the signal will move through the various effects sitting on each respective track. Not every effect will output at the same volume level as it has  received it. Very often intentionally so. Also here, we have to ensure that the levels are sensible. Luckily, we have small meters between effects showing if the volume levels are in the green or red. Most effects, native Live ones or plug-ins alike, offer output level controls. Some even for the input as well. Make use of them to boost or attenuate to achieve a good level. 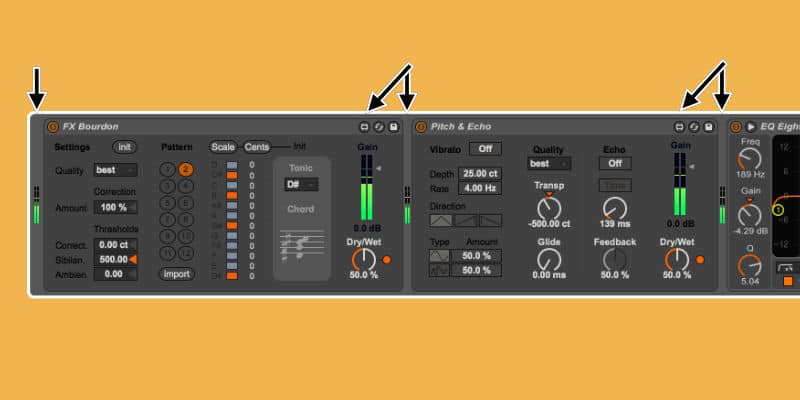 Gain Staging in the Device Chain

In music, there are always exceptions to the rule. Sometimes you need to run a signal too hot to achieve a specific sound. If so, just make sure that in the end at the output no clipping occurs anymore.

A little tip: If the volume of your track seems too quiet overall, leave the faders in Live alone and instead adjust it via your audio interface, its control software or your monitors. Leave “the make it loud” bit until the mastering stage.