Hurray! We've reached the landmark of 200 posts on Sonic Bloom with this one. And it comes packed with a little surprise for you - Verbotron made by Christian Kleine, exclusively here on Sonic Bloom. A great Max for Live addition to your collection of reverbs. The Verbotron uses the original Gigaverb algorithm by Juhana Sadeharju which is also known as "Gverb" in Audacity. It also features a handy visual representation of the reverb parameters.

Verbotron requires Live 9 and Max for Live (6.1) and comes in a self-installing Live Pack that contains 9 presets. 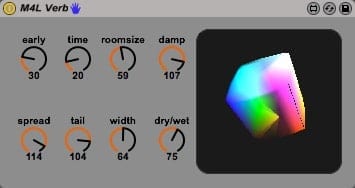 Head over to the new and improved Verbotron v1.1. which is still free.