Saving your work in Ableton Live seems easy enough to not need a tutorial, but it's something that comes up fairly often as a problem when I'm giving lessons. This is, because the file structure Live uses is more complex than software like Word that uses only one file for all information. I made the same mistakes early on as well, and it can mean lost data and incomplete Live Sets. 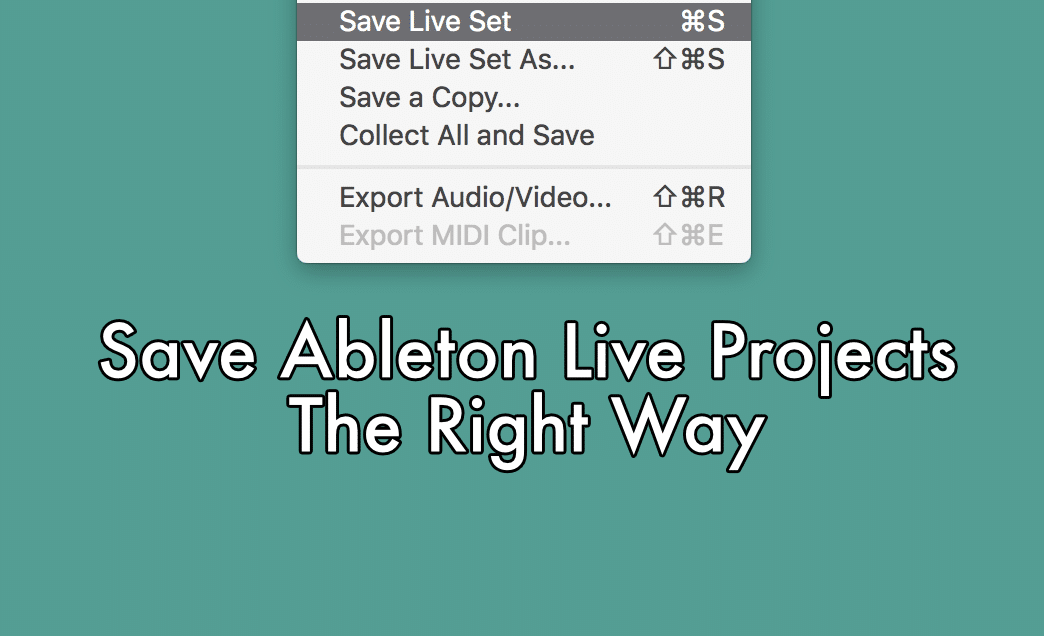 The File Structure of an Ableton Live Project

A Live Set in Ableton Live always needs to be enclosed in a Project folder which gets the same name as the initially saved Live Set. The reason is that Live only references audio files in the Live Set, but they're not actually saved in the .als file, as this would make it huge rather quickly. So instead, the Project folder also contains an "Ableton Project Info" folder and a Samples folder that the recorded or processed audio which generated a new audio file is saved into. There can also be other folders included, like the Presets folder in the screenshot, which contains Max for Live devices used for this song. 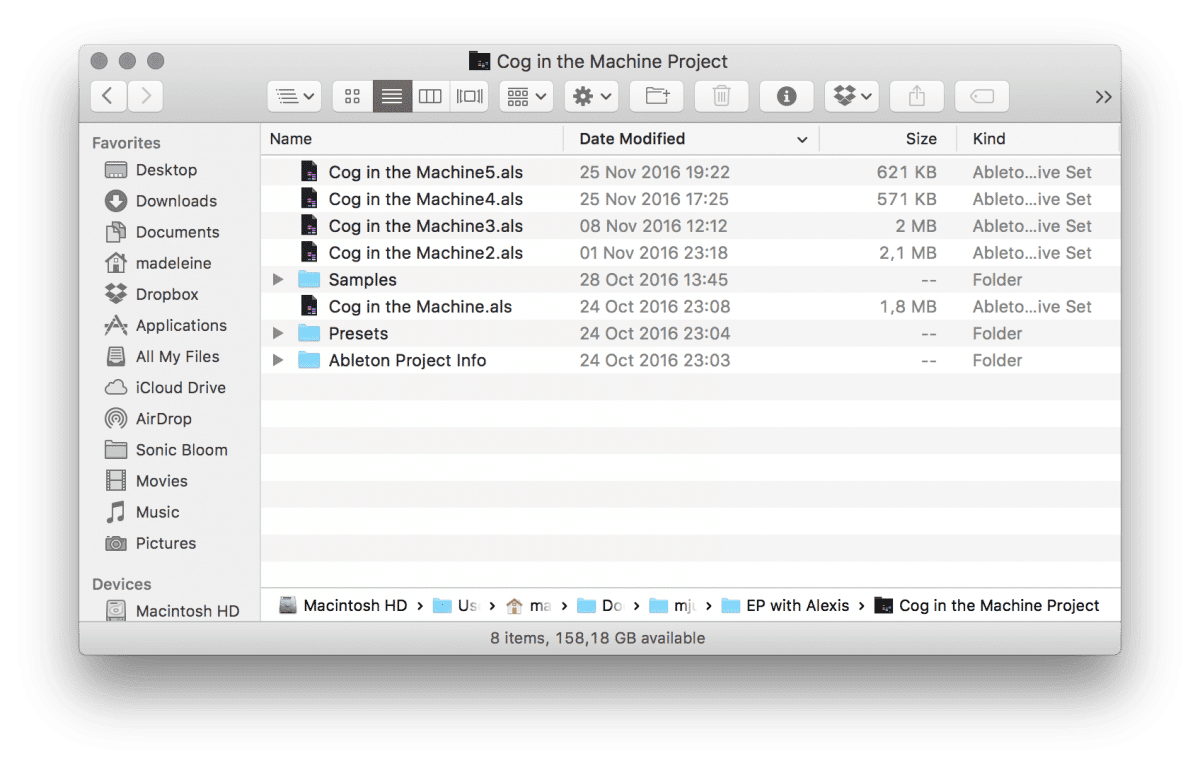 Note: If you import audio files, they will not automatically be copied into the Samples folder. The Live Set will simply link to the current location of each audio file. So if you move, rename or delete them, or you'd imported files from an external drive that is no longer connected, Live will show the message "Media files are missing" at the bottom left of the GUI. To avoid this, make sure to always use the "Collect all and save" command from the File menu. Here's a detailed tutorial about this. 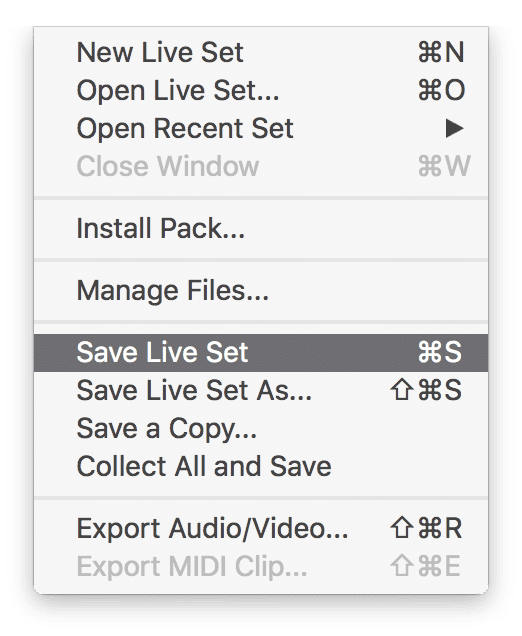 The idea is that within this Project folder you'd also save versions to keep different states of your music production process for a particular song, track or live performance set. You can simply number the versions as you progress, add the date or a short note of what you've been working on.

Now, let's talk about the different options for saving a Live Set in Live.

When you save a new idea, this is the command you'd use or the shortcut Cmd+S (Mac)/ Ctrl+S (Windows), just like with any software that allows saving. "Save Live Set" also saves the state of the currently open Live Set by overwriting the same file, which in turn empties the Undo History. Keep this in mind, when saving. You don't want to be unable to undo something you end up not liking, but you also want to keep your work safe. I generally save once I've made a change, listened back and am happy with it.

Note: Make sure, you don't save a new Live Set within the Project folder of another song or track, or else you will encounter the pesky "Media files are missing" message later on, because the Project folder for it can't be created in another one. Thus, the Samples folder will be missing, and you'll easily lose files. The Live Library is also off limits, as it might be broken this way. It's best, when you create a dedicated folder in Finder/Windows Explorer, that you then save each new Live Set into.

"Save Live Set As..." is for saving a new version of the Live Set you're currently working on, e.g. MyTrack02.als. In this example, MyTrack.als gets left behind in its last saved state, and you go on working with MyTrack02.als. You can also completely change the name of the set and/or save it in a new location. Generally, you'd simply change part of the name and save it within the Live Project folder just like the initial version.

With "Save a Copy..." on the other hand, the working scenario is different. You keep working on your initial Live Set, e.g. MyTrack.als, throughout the whole production process. You use "Save a Copy..." to take a snapshot of the current state. Again, you can change the name of the set and/or the location. If you choose the default name, your track will be saved as "MyTrack Copy.als"

As long as you use either command to save a file within the Project folder, just a new .als file will be created. If you choose to save it somewhere else, a new Live Project folder by the same name will be added in the selected location, that will contain the "Ableton Project Info" folder as well as the .als file itself, but not the Samples folder. To avoid missing media files, use the "Collect all and save" command from the File menu, say, if you want to move it elsewhere for backup or to send it to a collaborator.

Which way of saving you prefer is up to you. I personally use the "Save Live Set As..." command, because it's the only one that offers a keyboard shortcut (Shift+Cmd+S (Mac)/Shift+Ctrl+S (Win)).

Note: Creating different files while progressing through the music production of the track is useful if you have managed to make matters worse and the older version sounds better. And if a Live Set becomes corrupted, which can happen during a crash, you can always go back to the previous version. I often end up with 30 or more versions until I've finished the production.

You're of course always welcome to add questions or suggestions in the comments below.