Today sees the release of OSCiLLOT by Max for Cats, a Max for Live modular system comprised of three Max for Live devices, over 100 patchable modules and 79 presets to get going. This time it's a collaboration between Nico Starke and Christian Kleine.

I've known about OSCiLLOT pretty much since they started collaborating on it, helped with questions about the interface design here, had discussions if and how something could work in theory that was causing issues. It's not your every day Max for Live device, it's something quite different from the rest. I thought I'd use this opportunity to interview both of them on this very ambitious project because you might find it just as interesting to hear about its conception and development. Here's the first part of the interview, the second one including a giveaway follows tomorrow.

To develop a modular system within Max for Live is something quite extraordinary. How did you get the idea?

Nico Starke: The idea actually exists for a very long time. Probably since the release of Max for Live itself. Max for Live is in itself a fantastic addition to Live, but you are somehow made to choose between two extremes: either you use ready-made devices or dive fully into the world of Max, which usually means that you programme more than make music.

For the modular junkie in me, this situation was never entirely satisfactory. I always wanted to have something in between - modular and flexible, but without the need of programming or understanding everything about DSP. If you want to compare it with the hardware world - I love the modular synthesiser for its flexibility, the fun and the learning effect that you can experience with them, but I don't really want to solder together each module individually. That's certainly fun, but you have to do quite a lot before getting out any sound.

And I always ended up missing my Nord Modular again, which basically uses the same approach. At some point I took to the digital soldering iron and started to explore Max's ways to create a modular synthesizer-like framework. At first I could produce modules using BPatchern and move them back and forth. I then looked into Bezier curves to be able to draw patch cables between the modules, but there simply were too many problems that I saw myself incapable of solving.

Eventually I came up with the idea to misuse Max' own patch cables for my purposes with a simple trick and it worked amazingly well. And so year after year I got a bit closer to the goal. In the middle of last year I had solved the last major issue - saving and restoring a patch and so the idea became a working prototype and a specific project for which I could win Christian.

Christian Kleine: The desire for a 'somehow' linkable system existed for me for many years as well. I used to work a lot with the Clavia Nord Modular and have always wanted a similar fast and musical environment in the Max-landscape - among other things, because then everyone programming with Max may participate in the musical 'building blocks'.

There is, for example, a Community framework for many years now (15?), which is based on Max - it's called LLOOPP (or recently PPOOLL). It is described as: "lloopp is written by musicians who use this very software for their performances. Anybody who is into max-programming is invited to join in." Although Lloopp has a completely different approach and focus, it is, in principle, meant to create a system with the help of Max, that can be modified and adapted for performance or music making quickly and without a big programming effort. 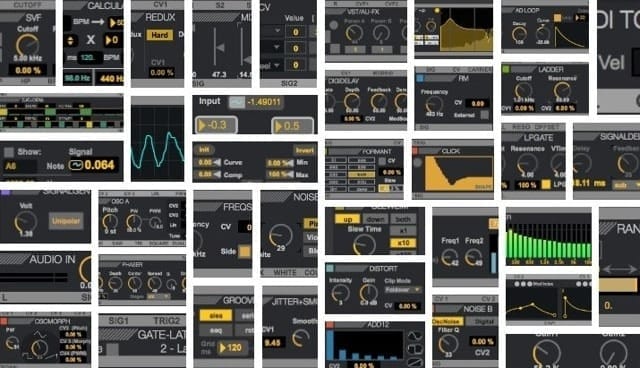 Usually Max for Cats is only Christian. But for OSCiLLOT you worked as a team. How did the collaboration work? Was there a strict division of labour?

NS: I did have a reasonably functioning framework, but there were actually only 3 rudimentary modules that I experimented with. I lacked the necessary DSP knowledge to create a meaningful arsenal of modules. When I presented the project to Christian, he was very excited. I think he had a very similar vision of how the whole thing should work and also the necessary DSP experience, but no framework. And so, two things came together that belonged together. :)

We were able to split up the work itself relatively well. I mainly took further care of the framework and the editor while Christian built the modules. There were hardly points where we could step on each other's feet. After we had addressed the major questions such as layout, range of modules etc., each of us could get started relatively independently. I regularly delivered a new editor version and Christian came up with new modules almost daily.

Of course there were a few overlaps. So for example, Christian had the idea for the in-line help system and simply implemented it in the editor. The next day I almost fell over backwards when I suddenly saw a youtube video running in the editor. Wow!

I refined or revised some of Christian's modules, if I had time for it. Otherwise, we have always been very pragmatic. Instead of discussing things to the smallest detail in advance, we always simply first made it and then looked at how well it worked. If something was not good enough, it was thrown out again. I very much liked this way of working. Alone, I probably would have been stuck in small details too often as I tend to be quite the tinkerer.

CK: I was/am quite excited about the collaboration on OSCiLLOT. We have very contrasting strengths that complement each other wonderfully.