Use Case: Digital Jam Session for Telekom at IFA 2017

I recently did a very interesting freelance job for the German Telekom at the IFA (a huge consumer technology tradeshow). The brief was to produce a "digital jam session" that people from the audience could join and create a good sounding track together with. But that wasn't all.

A whole lot of limitations, but I do like working with them, and I love a good challenge.

Since the deadline was tight, very tight indeed, I needed to send them the list of used and needed gear within three days. Generally, I would have started creating the two tracks that would be the core of the jams first, and then figure out the technical setup. They wanted me to include an iPad (in between even two), Push as well as a synth.

I decided to use only one computer with Ableton Live, and a synth that offered presets, since the setup needed to be as fast as possible. 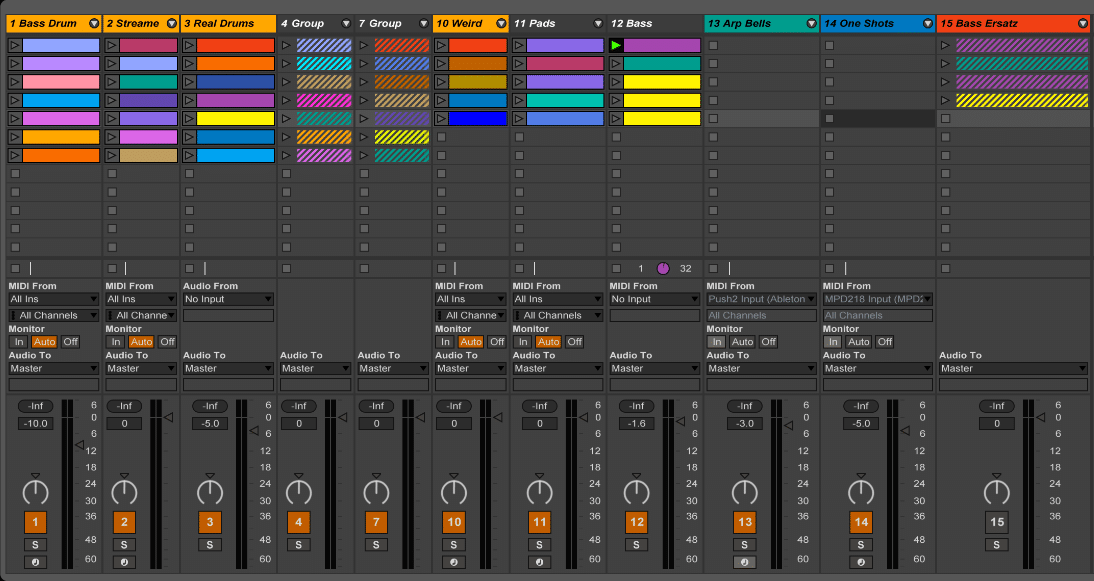 The first problem arose when they realised that you can't rent MIDI controllers and synths anywhere, so things would have to be either bought, brought by me or borrowed elsewhere. They bought the Launchpad (mine had died), MPD218, an iConnect, a USB3 powered hub and some USB cables. They also would provide the iPads and buy the controller apps.

I would bring my MacBook Pro, audio interface, Push 2 and Leap Motion. I also needed to find a replacement for the Bass Station II. After some tests, I decided to use my OP-1 with the crank handle, which could be used to increase the speed of the LFO. Very easy to understand and very visual.

After I'd gotten one of their iPads, I tried setting up touchAble, but could never get the server to connect. Googling the issue showed eventually, that it was a bug, not me being too tired to do it correctly at 3 am. Setting up Lemur was a breeze, so I figured I'd ignore the second iPad for the time being.

The whole "digital jam session" segment was supposed to be about 5 mins long. That included the moderator introducing me and the idea, getting up to six volunteers from the audience, explaining each controller's role, and about 3 mins of jamming. To me, that sounded pretty impossible, but I'd learned over the years, that clients generally need to see something not work, to drop their idea and go with yours.

In the meantime, I'd composed two "moods" to play to the client as a rough draft of how the jam sessions could sound like. The first one (I called it Atmos), the more atmospheric track, was accepted right away. The second (Moxie, more driven and club oriented) was met with some reservation. After a 40 minute call I figured out that they wanted the beats not to come in right away, and a major key instead of minor to make them happy.

Mood One aka Atmos:

In effect, these two "moods" were the two different Live Sets that people would jam with. Initially they wanted three, but preproducing and mixing three tracks in such a short amount of time would have been impossible. And it was clear that I'd have to choose the right sounds and preproduce most of the parts. Only the people controlling Push and the MPD218 would add elements on their own.

As they'd liked my own sound, they left me pretty much free rein, so I used quite a lot of presets and sounds from the free Sonic Bloom Live Packs. I finished both sets in the morning of the first rehearsal day out of three, knowing I'd have to make changes anyway. I was only too right about that. The Leap Motion was a nice idea, but the lights sometimes messed with the sensor, and it took people a while to figure out the right kind of gestures. Time we didn't have. There was also no time to get five volunteers, explain each controller and let the respective audience member try it.

I'd added chain selectors and mapped parameters for most controllers, but it turned out, there was neither time to explain all of it, nor was it a good idea. Most test participants were overwhelmed and simply pressed all kinds of buttons and turned knobs, which could lead to disastrous consequences. So I simply set different presets before each jam to add variation. Had I mentioned that each jam was supposed to be (and subsequently was) uploaded to Soundcloud?

One of the Jams with Teenage Girls:

I replaced the Leap Motion with the iPad and only added one XY field for the Autofilter as a control in Lemur. Together with the crank on the OP-1, people seemed to have fun with the bass.

The arpeggiated melodies on the Ableton Push 2 and the samples on the MPD218 were easily understood and test jammers were quite enthusiastic about doing their part on them. The Launchpad with quantised clips didn't translate at all though. Additionally, the moderators and I thought that finding three people to get on stage without knowing if they could make make a fool of themselves was going to be enough trouble and time. We had to have a stagehand pretend to be part of the audience twice in the end throughout all sessions. I also learned that if you point to someone from a stage, they often feel obligated to take part. 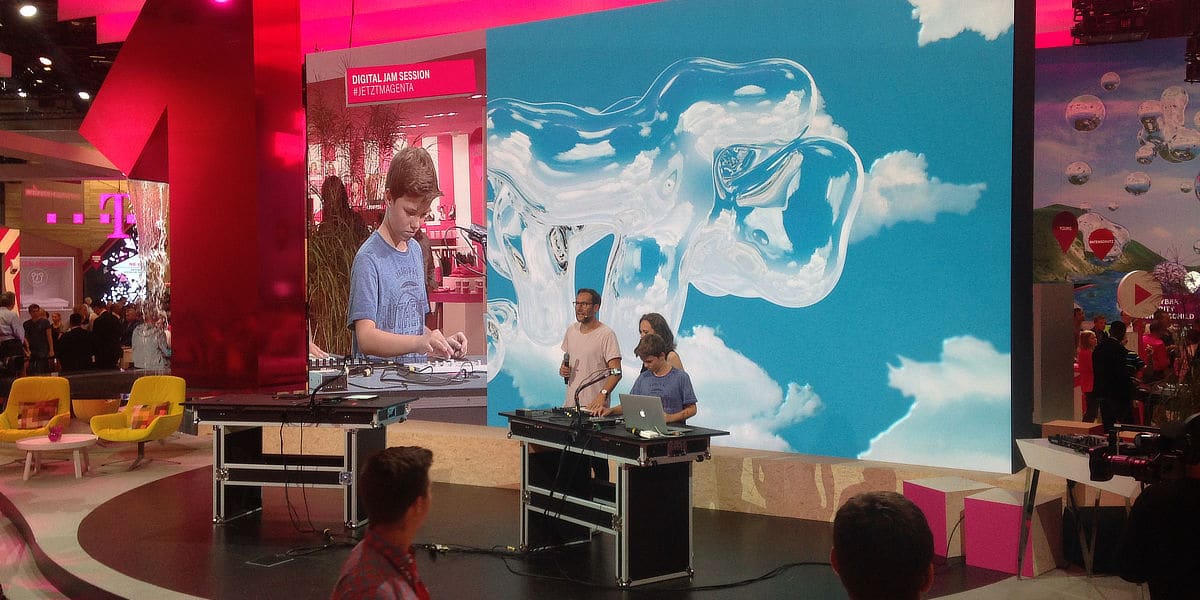 So we decided that I'd take over the Launchpad, which now controlled the first 8 tracks of the set. Beats and percussion clips (the first six), as well as clips for bass and keys. Before I was supposed to be a kind of conductor, who would make suggestions over the PA system. That didn't work at all, as they had to duck out the music when my voice came on, which meant neither the people on stage nor I could hear their output anymore. Instead I took on the role of the band leader giving the jams a skeleton of sound and rhythm that the others could have fun around. If anything went haywire, I could always step in.

My audio interface, the MIDI interface, the USB hub and about half of the cables were screwed into the two flightcase tables. This way the table looked neat enough, and setup was going to be minimal. Once the power was connected, I only had to set my audio interface as the audio input and output source, switch on the OP-1, set the bass sound with two key presses, set the LFO to be cranked with one more, and do a quick sound check to see if the output worked.

A few times, the OP-1 wouldn't turn on (which turned out to be a rocky USB connection), but I'd kept an extra track with a Live preset just in case.

The first digital jam session with real audience members was a blast. It was the most fun one of them all for me. A German YouTube star I'd never heard of before was scheduled to perform later, so a lot of teenage girls were in the audience. Three pretty much jumped on stage right away after given the option and they really went with it. Overall, the younger people were all more likely to dare jam with me, adults were often more reluctant.

One of the Jams on Day 3 with 3 Teenage Boys

You can listen to all of the digital jam sessions on Soundcloud and even download them.