In this two part series, we're going to have a look at audio effects. First we go through the types of effects  as well as best practises for the order in an effects chain, while in the second part, we'll look at some different and unusual orderings to create specific sounds.

A topic that keeps confusing users new to producing, is the order of effects. Is there a right way to the signal flow of effects? The problem is, that the answer is that it depends, there is no absolute rule. It depends on what sound characteristics you want to achieve. An effects chain that is generally avoided, can prove perfect for a certain sound.  It's most important to know that it makes a difference in sound if you place a compressor or reverb first or last in the chain.

When you look at what different producers recommend as a typical order, you will see, they don't necessarily even agree on this. 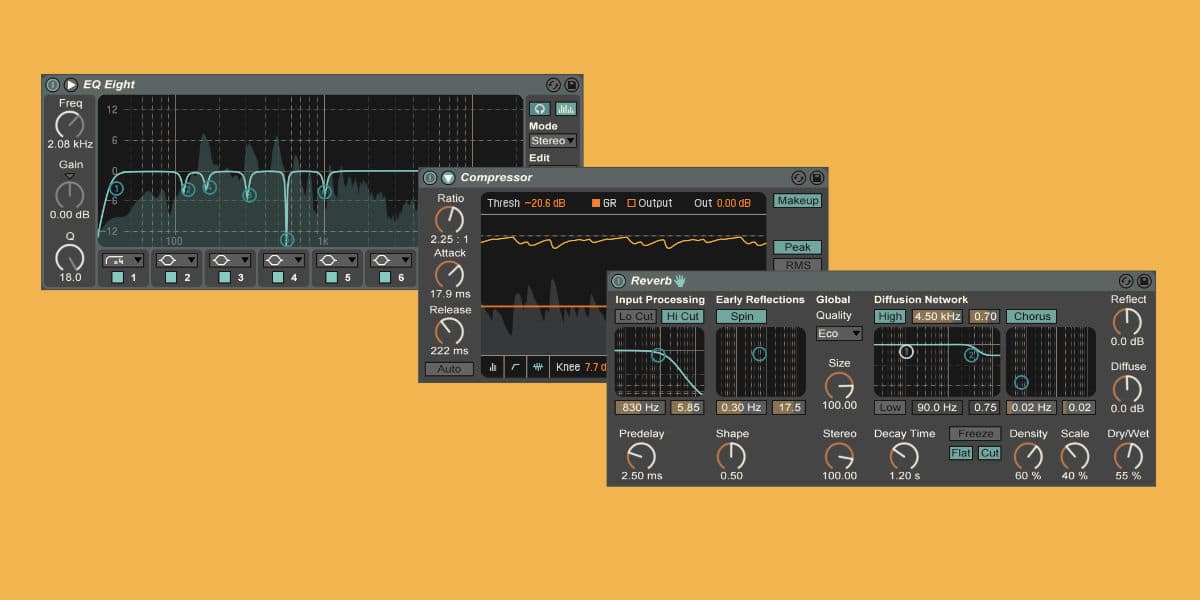 Let's have a look at the different types of audio effects that exist and in which of these categories the effects in Live Suite fall into.

Dynamic effects alter an audio signal based on frequency content and amplitude level, thus changing the dynamic of the processed sound.

With filters, specific frequencies can be suppressed  or emphasised in an audio signal. They can either be used to clean up recorded audio or to colour the sound in a particular way.

Modulation effects are used to add motion and depth to the sound. They modulate the timing of the incoming signal.

These are effects that have only limited functions which either don't change the characteristics of a sound or don't affect it at all.

Audio effects in this category aren't so easily classified. With more powerful computers we're seeing more and more effects with hybrid or even completely new features that were previously technically too complicated to realise, especially in real time.

What the first effect in the chain should be, depends a bit on the audio we're processing. The Utility could be first in line, if you prefer doing the gain staging with it.

If you're recording real instruments or vocals, especially through a microphone in a less than perfectly treated recording environment, I'd recommend cleaning up the sound first before adding any other effects. So in this case, the first effect would be an EQ, in Live the EQ Eight - mostly employed to cut narrow frequency bands that are too pronounced or undesired. This is called subtractive EQ.

I wouldn't use an EQ in the first position of an effects chain while boosting frequencies, aka additive EQ. I would use a subtractive EQ on tracks with MIDI instruments first as well. If you're working a lot with prepackaged loops and samples, chances are the sound has been cleaned up already.

Next up, you'd generally want to rein in the dynamics of your audio with a compressor to make it sit better in the mix. Basically, EQ and compression in the beginning of an effects chain are used to fix the sound and dynamics only.

Modulation effects like delay or reverb create an effects tail, that most of the time you will not want to be affected further. This is why they tend to be placed last in an effect chain, or in return tracks. If you want to use delay and reverb together, you'll most often place the delay before the reverb, so the reverb doesn't wash out the delays.

Everything else is up to you depending on the sound you wish to create. In DAWs like Ableton Live, the order of effects can be easily changed by dragging and dropping. So make sure to try out different orders to see which you like best for each particular sound. The more you try out things, the easier it will get to create the right order of effects to achieve the sound you have in mind.

In the second part of this mini series about audio effects, we'll have a look at some interesting effect combos for inspiration.