By now there are countless key layouts at our disposal. Traditional ones like the piano roll or the layout in fourths (string instruments, e.g. the guitar) that require knowledge in music theory as well as modern ones created to make playing easy even for those who don't know anything about it. Fingertip MIDI is virtual MIDI controller for iPhone and iPad that allows you to control any MIDI capable software. And it falls squarely into the second category.

The notes are arranged in rows per key, the first three notes of each row always creating the triad of the key. The rows are stacked on top of each other, each row down is a fifth up, but with the relative minor keys right beneath the major ones. Not that you'd really need to know all this. All you need to know is that the first three notes in a row create the triad chord and all other notes in the row fit with it. Since only eight rows are shown at once, all keys will sound good with each other because they will have most notes in common with each other. 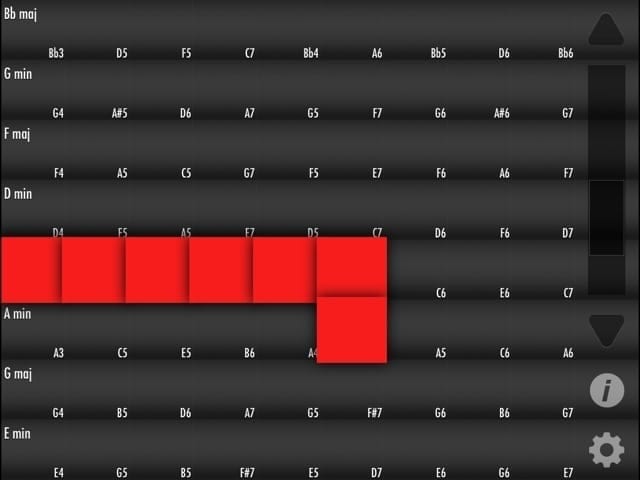 To connect Fingertip MIDI to your software (I used Ableton Live) you first need to connect them to the same wi-fi network or create an ad-hoc network as well as set up a MIDI network session. It's fairly simply on Mac, but considering other iOS apps out there provide this already, it'd be good to have a little app on the computer to take care of this step.

I must admit, when I at first tried Fingertip MIDI with a piano sound, I found it confusing as the layout is quite contrary to how I learnt to play the piano. Once I tried guitar, string and bell sounds I found the layout very useful and intuitive. With string instruments, it's so easy to create nice melodies and patterns that are interesting and tuneful. The same goes for bell or pad sounds. The app will be most useful for anyone without any knowledge of music theory. For trained musicians, it could be a nice addition for creating ad libs or just getting out of the same headspace with the different layout. It's great for playing intricate fast patterns and runs. The possible scales are of course limited by design.